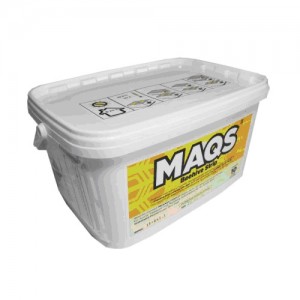 MAQS® Beehive Strip was ﬁrst developed in Canada, by NOD Apiary Products Ltd. operating in the UK as NOD Europe. It is based on Formic Acid and is used as a treatment on honeybees to kill the varroa mite

FORMIC Acid is a naturally occurring acid and trace amounts can be found naturally in honey.

In Ireland the Department of Agriculture, Fisheries and Food have sanctioned the use of MAQs.

It comes in a Whitish/caramel flat rectangular strip in a coated paper wrap. 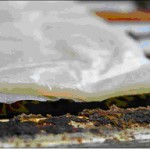 It kills varroa and can be used during the active beekeeping season.

Over the years the varroa mite has developed a resistance to treatments such as Bayvarol. Bayvarol and Apiguard, another varroa treatment, has to be used after the honey flow.

When to use it

MAQS® Beehive Strip can be used during the active beekeeping season with outside daytime temperatures between 10 to 29.5C

Can only be used on full colonies. NOT on NUCs.

For Honey: Maximize healthy colony populations by treating with MAQS 4 to 6 weeks before main honey flows. Have a super on.

For Overwintering: Treat at end of the honey flow, preferably while the last super is still on.

Where to get it

How to use it

Each colony requires a treatment using two strips (one sachet).

Open up the colony, remove supers and Queen excluder.

Leave for 7 days. Strips need not be removed after treatment, but can be disposed of by composting.

It has been reported that in some cases MAQs can cause, in the first few days: 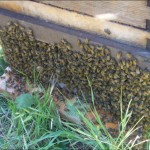 Bearding due to MAQ’s applied.
From scientific beekeeping website

Also reported is that the colony settles down after the first few days.

It is a corrosive agent, wear protective clothing. Avoid contact with metal surfaces.

Well worth reading this article at the following link before you use it.