Api-Bioxal is a product produced by an Italian company based on Oxalic Acid and is used as a treatment for honeybees to kill the varroa mite. Api-Bioxal is an acaricide (a pesticide that kill members of the arachnid subclass Acari, which includes ticks and mites) and comes in a soluble powder.

OXALIC ACID is one of the most common and best natural acaricides.

In Ireland The Department of Agriculture, Fisheries and Food have sanctioned the use of Api-Bioxal

Over the years the varroa mite has developed a resiistance to treatments such as Bayvarol. Along with an integrated pest management system and a primary autumn treatment of Bayvarol or Apiguard the beekeeper can use Api-Bioxal to reduce the varroa mite population.

When to use it

Api-bioxal is used as a supplementary treatment during the broodless period in winter (late December and Early January).

It works best on colonies that are broodless. The presence of brood may reduce noticeably the efficacy of API-Bioxal.

Do the treatments without supers.

All colonies in the same apiary should be treated simultaneously to avoid reinfestations.

Do not use simultaneously with other acaricides.

Where to get it

How to use it

The product may be administered using the trickling method or by vaporization with a suitable apparatus. 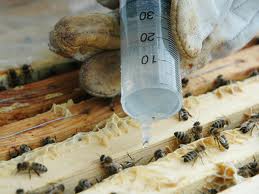 Open the sachet of API-Bioxal and dissolve all the powder in the indicated amount of syrup.

The treatment should be made in a single administration, dropping the solution with a syringe on the honeycombs, across their direction, in dose of 5 ml per occupied frame space (seam) 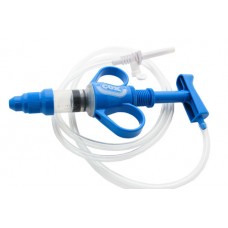 For easy dispensing one option is to use a simple single action syringe that dispenses 5ml or less as required, refills automatically from your chosen reservoir.  Moreway Ltd in Roscommon sell a version for €12.99 called the F-Grip.

Check their website at Moreway Ltd or see the PDF of the part: F-Grip Pdf document.

Other suppliers are Fane Valley Stores which do the do the Ezi-Grip See or the 5ml Auto syringe at Thornes. 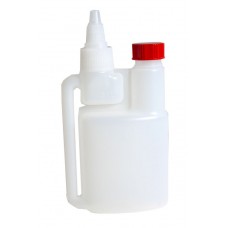 Another dispensing option is a Trickle bottle.  Simply squeeze the bottle until 5ml. of solution is in the upper chamber, if you squeeze over 5ml. the residue will return to the main chamber. Hold the container with the 5ml. chamber closest to your wrist, unlock the nozzle and invert. Squeeze gently, running the liquid along the first seam of bees, once the 5ml. chamber is empty, turn the container over and refill chamber with a quick squeeze, it will always level out at 5ml. Repeat the process on the next seam. Simple and efficient. For empty bottles See Thornes

It call also be applied using a vapouriser. See examples at Thornes.

Use an electric resistance device for vapourisation. Fill the pan of the vaporizer with 2.3 g of API-Bioxal. Place the appliance through the entrance of the hive under the bees and avoid the contact with the honey combs. Seal the entrance of the hive to avoid escape of bees and smoke. To power the vaporizer following the manufacturer’s directions for about 3 minutes (about 280-290°C of final temperature) and Keep the hive shut for another 10 minutes. Cool down and clean the vapourizer after every use from possible residue (max 6%, around 0,140 g).

Some Science articles on Oxalic Acid at

This video shows an application of Oxalic Acid using the trickle method and trickle bottle.